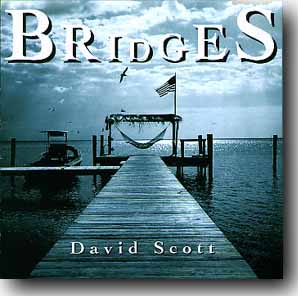 David Scott’s musical tastes cover a wide spectrum of styles. It’s not uncommon to find David on a session in Los Angeles for a country artist and on a jazz gig later that day. Good music supercedes style or genre. David has written for television and film where the composer’s job is to support the visual scene. The songs on this recording stand on their own while the listener can recall or invent their own scenarios. After a day of phonecalls and file cabinets I listen to the songs of ÒBridgesÓ as my thoughts drift to quiet places and fond memories. These songs, coming from such places, will hopefully transport you and lift your spirits.