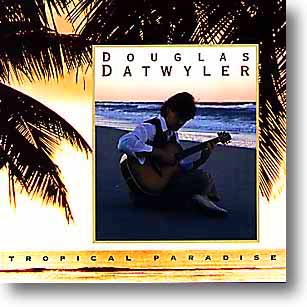 Douglas Datwyler was born in Chicago, Illinois and later raised in Dallas, Texas. Studying judo at the age eight under former Olympic coach Vince Tamura, he later moved to karate which he studied for the next ten years.

Art was very important to him at a young age. Having a Japanese mother, painting, cooking, and origami (Japanese paper folding) were handed down as a tradition. In his late teens he discovered music after doing some modeling and acting professionally.

Beginning guitar at age nineteen, he wanted the best education, feeling he started music late. After studying with Jackie King and Herb Ellis, he continued his musical education at North Texas State University under Jack Petersen. Taking all the music courses he could, he finally made the guitar a natural instrument for his expression.

From Dallas, Doug re-located to Los Angeles where he was hired by Grammy award-winning group The Commodores. The next six to seven years were spent touring and recording with the group. Then with major endorsements (Fender guitars) and performing experience he embarked a solo career.

His music expresses the beauty of his art through the smooth latin-based jazz sounds of “TROPICAL PARADISE”.

Douglas Datwyler about the songs:

“During my years with the Commodores I would frequently travel to South America, Africa, and dozens of remote tropical countries. I heard countless bands playing different styles of music that originated from their roots. I would compose music that was influenced by the people and sounds around me. It is from these influences that “TROPICAL PARADISE” was born.”